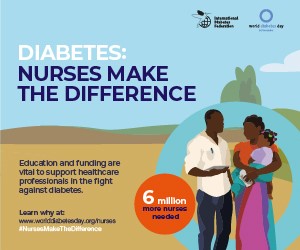 The theme for World Diabetes Day 2020, celebrated on 14 November, is “Diabetes: Nurses Make the Difference”.  Today, we bring you a case study from India which illustrates the way nurses are making the difference for many people suffering from foot complications due to diabetes.

Foot complications are one of the most common and debilitating complications of diabetes. They result in multi-dimensional challenges such as increased frequency of hospitalization, social impact, emotional impact, increased health expenditure and economic burden. Diabetic foot complication could significantly impair the mobility of the individual, affect functional independence and quality of life. Globally, every 30 seconds, one person with diabetes undergoes amputation. In India, approximately 50,000 people lose their feet per annum due to diabetes. Nurses have an essential role in the prevention of diabetic foot problems and in the care and education of patients at risk of diabetic foot problems.

Due to a lack of knowledge regarding diabetes complications, it is highly important to increase awareness and knowledge both for prevention and treatment of such complications in the area of Karnataka in India.

To address this problem a multi-faceted approach, entitled Diabetic Foot Care: Stepping Ahead” was adopted to increase the quality of foot care and to support affected families.  The project included capacity building training for different levels of health professionals, social mobilisation for creating awareness, lifestyle modifications and behavioural change communications, establishment of different levels of diabetic foot clinics and research in diabetic foot care. The project was supported by the World Diabetes Foundation. Manipal College of Health Professionals and Kasturba Hospital – Manipal Academy of Higher Education was the principal recipient of the Project.

Betty Neuman’s system model was incorporated in the service delivery model. This provides a comprehensive holistic and system-based approach to nursing that contains an element of flexibility. The theory focuses on the person’s relationship to stress, the response to it, and reconstitution factors that are progressive in nature.

The project manager was a nurse; the principal investigator, senior health educator and clinician were physiotherapists. Once the improved diabetic foot care was established at the targeted facilities, an awareness campaign within the surrounding communities was rolled out. The campaign included camps for awareness and screening, where known diabetes cases and people at risk were provided foot care at primary level, and complicated cases were referred.

A mobile unit was established which handled foot care services in more remote areas, raising awareness and undertaking screening activities. This made it possible to reach a greater amount of people living in the most rural areas.